Trigeminal neuralgia (TN), also known as tic douloureux, is chronic pain associated with pathological activity of the trigeminal nerves. The pain is neuropathic, arising from a malfunctioning of the nerves themselves, rather than from normally painful stimuli. At its most intense, TN pain is some of the worst imaginable, producing electric shock-like sensations, as well as burning, stabbing, slicing, and other forms of severe pain. TN is commonly mistaken for dental problems, and many healthy teeth have been drilled and extracted before the correct diagnosis of TN was made.

TN pain may be episodic or constant. Episodic TN, called "typical" or "type 1" TN, produces bursts of pain lasting from a second to as much as two minutes. These bursts commonly come in clusters that persist for a few minutes to several hours. The pain is commonly excruciating and shock-like; it can, in extreme conditions, knock the sufferer to the ground. Between episodes, there is generally little to no pain. An episode may be triggered by contact or vibration to the affected part of the face or mouth; common triggers include touching the face, wind, talking, tooth brushing, washing, hair combing, and eating. An episode may also occur without an apparent trigger. The episodes commonly become more frequent and severe over time.

There are two trigeminal nerves, one on each side of the head. As its name suggests, each trigeminal nerve has three branches. These allow sensation for the entire face, as well as the inside of the mouth, including the front two-thirds of the tongue. The figure below shows the location of the left trigeminal nerve and the distribution of sensation from its three branches. The regions served by the three branches are designated, from top to bottom, the ophthalmic division, the maxillary division, and the mandibular division. Most cases of TN are restricted to one division on one side of the face, though any combination of divisions is possible, and the distribution of pain can change over time. 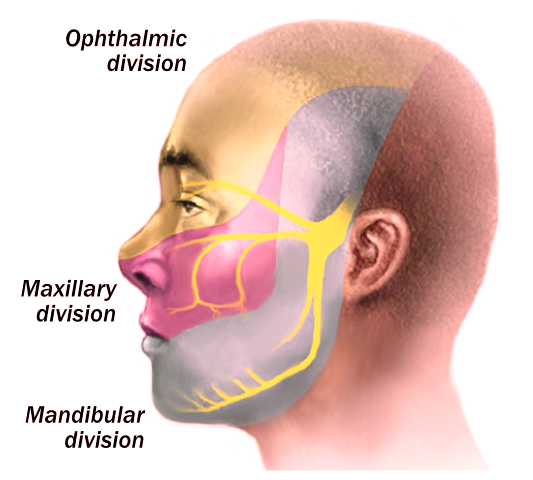 TN may arise following trauma to the head, such as from a fall or a motor vehicle accident, which causes damage to a trigeminal nerve. TN may also arise following certain infections (including shingles) or dental work, or in connection with multiple sclerosis or cancer. Many cases are attributed to a blood vessel (or vessels) impinging on the trigeminal nerve within the skull; this condition can usually be assessed with magnetic resonance imaging (MRI). A definitive cause for TN cannot, however, be established in many, if not most, cases. A genetic predisposition to TN appears to be present in some people.

Numerous pharmaceutical and surgical treatments are used for TN, with widely varying results. Many people find that their TN pain is well managed with particular drugs, though the side effects, particularly sedation, can be problematic. Other patients, though, find little to no relief from any available drugs. Surgery is sometimes curative, though it commonly provides only temporary relief or is ineffective. The links at the end of this article provide details regarding the various therapies.

Drugs used to treat TN
Opioid narcotics, including morphine: These are commonly not very effective, and can cause sedation, constipation, tolerance, and addiction. Some TN sufferers, though, particulary those with type 2 TN, may benefit from them. Several research studies have found that opioids may make some chronic pain worse over time.

Anti-epileptic drugs, including carbamazepine, oxcarbazepine, topiramate, gabapentin, pregabalin, clonazepam, phenytoin, lamotrigine, and valproic acid: These are effective, at least partially, in many people, particularly for type 1 TN. They commonly produce sedation and other side effects, and tolerance can develop, requiring increasing doses until a maximum safe dose is reached.

Tricyclic antidepressants, particularly amitriptyline and nortriptyline: These are sometimes effective, but can produce many neurological side effects.

Topical anesthetics, such as lidocaine and capsaicin: Lidocaine will reliably numb the skin, but it commonly does not provide much relief from neuropathic pain. Capsaicin is not a typical anesthetic; it actually produces a strong burning pain, which may be followed by some pain relief due to nerve damage.

Other drugs: Numerous other drugs have been tried for TN; many have shown some efficacy in some individuals. These other drugs include baclofen, benzodiazepines including clonazepam, barbiturates including phenobarbital, and botulinum toxin.

Surgery used to treat TN
Rhizotomy: Rhizotomy is the intentional damage to nerves, which cane be done in an attempt to relieve pain. Many techniques are used, all resulting in some loss of sensation in the face and/or mouth. Efficacy is highly variable, and is commonly temporary. Procedures currently in use include glycerol injection, balloon compression, radiofrequency thermal ablation, and stereotactic radiosurgery (gamma knife, cyber knife). In extreme cases, a branch of the trigeminal nerve is sugically severed; this results in extensive loss of sensation.

Microvascular decompression: This is brain surgery to relieve the pressure of one or more blood vessels on the trigeminal nerve. Typically, a pad is placed between the impinging vessel or vessels and the nerve. In some individuals this procedure has produced an apparent cure of their TN; in others, there have been varying degrees of pain relief for varying periods of time.

Pharmaceutical Management of Trigeminal Neuralgia in the Elderly
Medscape
WebMD

*Gallixa® is not intended to diagnose, treat, cure, or prevent any disease or condition.